I've been away from the computer at English camp for a few days. Maybe more on that later. But for the time being, here are a few recommendations.

One of the notable differences about the cities in Brazil from England is the noise levels. Although the legislation about noise pollution in England often doesn't work very well, at least it exists. In Brazil, it doesn't, and you can often find loudspeaker vans going round the streets blaring out advertising messages or music or whatever. 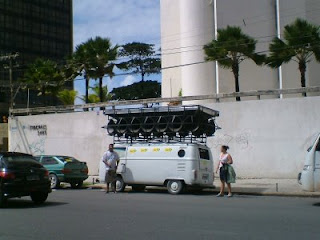 Anyway, the other day one of these was blaring music out only about a block away, so I could hear it clearly, and it seemed to be stationary. So I went to take a photo - the one above in fact, and found that it was part of some kind of political advertising thing - there were people waving big flags in the yellow and green of this candidate by the side of the road, and the above van was soon joined by another, of more modern design, which was basically just a set of loudspeakers on wheels. 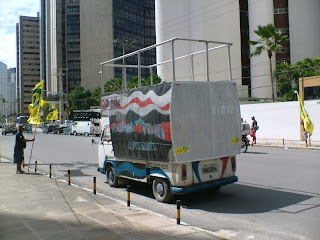 Shortly after taking the above photos, I was threatened by a couple of heavies (but this being Brazil, I was quite a bit taller than them) wearing T-shirts of the candidate in question. They seemed very unhappy with me taking photos. Unable to take recourse to the obvious solution of asking them about their candidate's views on whether or not it should be a free country (due to the fact that although I can understand a fair bit of Portuguese, I cannot speak much at all), I pretended to understand even less, said something like "delete, delete", and carried on walking as if I wasn't threatened by them (same principle as works for dogs).

So if perchance any readers of this blog get the chance to vote for someone with the antiseptic-sounding name of Nilton Carneiro, with yellow and green colours, don't, because his campaign seems to consist of impolite thugs, which suggests that he might well be one too. [Edited to add this next bit]. On the other hand, the person who seems to be his main opponent, Andrei Campos, also seems to use all three main methods of campaigning - logos painted on walls, flag wavers and very very loud music. But Campos appears to be a communist and Carneiro at least vaguely Christian. I therefore suspect if I had a vote, I might actually vote for Carneiro, but if I could speak Portuguese, I'd urge him to campaign in a more loving fashion.

On the positive side of recommending, if anyone is travelling to Brazil, I thoroughly recommend the insect repellant known as Off. Some people I was with got bitten a lot - one poor guy got 42 mosquito bites and started getting allergic reactions to them. The person running the camp recommended Off. People who used it didn't get bitten. People who used other insect repellants seemed to. But I don't know if it works on British midges.

Presumably in the UK it's marketed as 'Bug off'?

And the advertising slogan is "Get Off!"

It's made by a company from the global North (Johnson, of baby shampoo fame), so it seems plausible it's available in the UK.

You may be surprised to read this about Nilton Carneiro from http://feneb.com/meta.htm:

"A mayoral candidate for the city of Jaboatão decided that the only way to rid the city school system of violence, drugs and yes, promiscuity among the students was to begin teaching them the Bible. He made speeches saying that once elected he would call on the School of the Bible to supply teachers and materials for that teaching to take place. He won the election with 76% of the vote. Now he is working hard to keep his promises."

Perhaps the `heavies' were just trying to evangelize you?

Wow - that's a real surprise Daniel. In that case, I wish he'd campaign in a more loving way (that doesn't involve blasting really really loud music out indiscriminately and involve having heavy guys try to intimidate people who take pictures)...