I bought a purple pepper from Sainsbury's the other day, because I wanted to know what it would taste like. 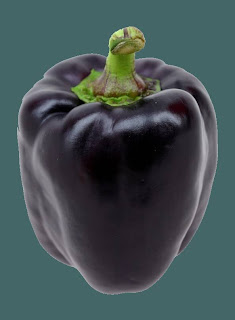 The cashier also said she wondered what it would taste like.

It was incredibly bland.

There seems to be this dumb idea that has got into the heads of food-selling people that people care primarily what food looks like rather than what it tastes like. Just try apples from a supermarket! And it's rubbish. I don't know where the idea comes from. I'd far rather have something that looked dodgy but was really tasty than something that looked all purple and shiny, but didn't taste of anything. And I think I'm in the majority for once on this.

Get a veg box. We get one which contains all manner of sized and shaped veg, but the taste compared to supermarket veg is a lot better.

We grow a variety of peppers called a Purple Belle. A beautiful eggplant purple on the outside and green inside. The taste would compare to that of a green pepper, but no bitter taste.(most green's are unripened coloured peppers that are picked early) As of yet, there have been no complaints about the taste of the peppers from consumers. Sometimes taste is not just the produce itself but other contributing factors such as growing environment, quality of water, herbicides or pesticide use , maturity of the produce and shelf life. I know I have been disappointed by an orange or two that looked beautiful on the outside but offered little enjoyment when bitten into.