Bill Bryson - A Short History of Nearly Everything

This is just about the best introduction to science generally for non-scientists that I've ever read. 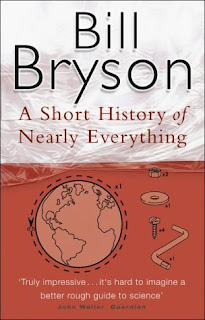 Bill Bryson manages to cover topics such as cosmology, geophysics, astrophysics, very basic chemistry and atomic physics, paleontology and evolutionary biology, all from the point of view of how they were discovered, thought of or argued about, and always focusing on the interesting characters involved as much as the science. He is refreshing in his honesty sometimes. Yes, it's only a basic introduction, yes, he makes a couple of mistakes, but I still learnt stuff about some of the characters and arguments involved in the history of science.

I think he tells the story (or stories) very well.

Out of interest what mistakes did you spot?

Yes - he is a very gifted storyteller. Much much better than me!

The mistake that springs to mind, and was quick to find, was that on p145 of the pictured edition, he says anything beyond 168 as an atomic weight is considered 'purely speculative'.

If that's atomic number rather than atomic weight, it makes sense. Otherwise U238 makes it look kind of silly.