The Lost World of Adam and Eve - John H Walton 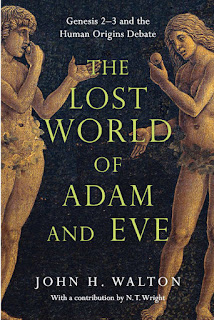 I've read a lot of Christian books that were okay – they didn't set the world alight but they might have reminded me of some important truths or put something in a slightly different way. This is not one of those; this could be a real game changer.

John Walton is professor of Old Testament at the bastion of US religious conservatism that is Wheaton College, and he's written this book to see what Genesis 1-3 really claims about creation, specifically the question of human origins. He doesn't bother with the science, because he isn't a scientist; he just sticks to what he is good at, which is Old Testament exegesis and cultural background. He doesn't even deal with Adam and Eve in the New Testament – he gets N.T. Wright to write that chapter. He also (quite rightly) recognises that the scientific arguments don't really matter much for Christians - we believe that God could have created the universe with the appearance of age and human beings with the appearance of being descended from a common ancestor with chimps; the question is whether he did.

Walton confirms what I have long thought; that Genesis 1-3 doesn't necessarily contradict the claims of modern science. Along the way he demolishes some of the things I'd already noticed were bogus (like the assumption that Adam and Eve were immortal in the Garden of Eden – if they were, they wouldn't have needed the Tree of Life) and some I hadn't spotted before (Adam and Eve are Hebrew nouns and Hebrew wasn't invented until Genesis 11, so they can't be the real names of the couple). He remains utterly committed to Biblical authority throughout; even while working on potentially controversial areas he gives clear, common sense, uncontroversial examples which show the validity of his position. Did several Old Testament authors believe in a solid sky? Yes, I suppose they did. Did the wine Jesus made from water in John 2 have the appearance of a potentially misleading history? Of course it did. Does the ancient belief that the heart was where a person did their thinking and feeling commit us to believe the same? No, it doesn't.

I'm not convinced by everything in the book – I think he over-eggs the concept of sacred space, for example, and there are some bits near the start of the book that badly need editing/rewriting. But I think that for the reader who can cope with his language and style, this book utterly demolishes the idea that you need to believe in young earth creationism to take the Bible seriously, and shows us just how much cultural baggage we bring into our readings of Genesis 1-3. Brilliant, eye-opening, thought-provoking.