Whom do you serve? 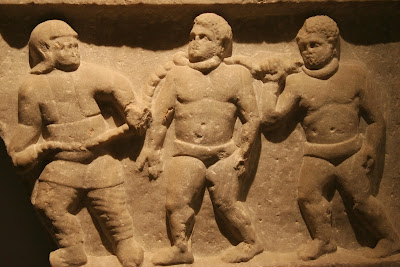 We all serve someone or something, whether we intend to or not. The weird thing is that we sometimes get to choose who.

So the stereotypical career-obsessed man is actually serving his career, sometimes even becomes a slave to his career. Perhaps a clearer question is “Where do you seek fulfilment?” The person who seeks fulfilment through sporting achievement serves their sport – they give their energy, their time, their effort to their sport, sometimes to the exclusion of other things in their lives.

Against that background, God's first commandment to his people cuts like a knife. “You shall have no other gods in my sight.” Sure we can do sport, drink wine, work hard at our jobs, but we should seek our ultimate source of fulfilment in God alone.

How do we decide who God is? There are three choices. Either we listen to others, or we see what he has revealed to us, or we make something up for ourselves. When we follow others, there's a danger that we're just following what someone else has made up about God. When God says “You shall not make for yourselves an idol...”, he's telling us to avoid making our own pictures of what God is like, and to follow the picture he has already given us in the Bible and in Jesus, as described in the Bible.

Saying “I like to think of God as...” is pretty stupid anyway. Why should there be any relation between the way we like to think of God and the way he actually is? Since when is our personal preference a reliable guide to the nature of the one who created the universe? That isn't much that works like that in the world, is there? (And for any pedantic not-yet-Christians out there – yes, I realise this isn't arguing for Christianity, only against self-constructed images of God and towards ones which come from plausible sources of revelation).

It seems to me that there are three quite different pictures of God going round in the church at the moment, only one of which comes from the Bible.

There's the picture of God as grumpy judge, defender of Victorian morality and condemner of those sins which we're more likely to approve of now than the Victorians were such as sexual promiscuity. For some reason he seems less bothered by the sins which we're more likely to be against now, such as wife-beating. This picture of God doesn't have much room for a Jesus who was criticised for hanging out with tax collectors, prostitutes and other known and notorious sinners.

There's also his opposite – God as the personification of the Spirit of the Age. This God doesn't judge or condemn people, except maybe those who do violence against children or who condemn others. He is open to changing and evolving morality, and in fact isn't overly keen on being described as “he” at all. This picture of God doesn't leave room for a Jesus who is fully divine and yet began his ministry by calling people to repentance, or who died to take God's just punishment on sin on himself.

Neither of those is the real God. Both of them are idols, spirits of this age or of the previous one that we transplant onto God and then blasphemously claim to be the real God.

The real God is far too uncomfortable for either of them. He commands us to be discerning but never condemning, to be in the world but not of it, to genuinely love the sinner and genuinely hate the sin, to serve him whose service is perfect freedom, to give everything to take hold of what is freely offered, to lose our lives for his sake and so to find them, to worship the one who is fully God and fully man, who died for us and lives and reigns forever. To him be the glory, now and forever!