Book Review - What is the Mission of the Church?

There's quite a bit of debate around at the moment among Christians about what is meant by mission. On one side are positions like the Anglican 5 Marks of Mission:

The Mission of the Church is the mission of Christ:

The first mark of mission... is really a summary of what all mission is about, because it is based on Jesus' own summary of his mission (Matthew 4:17, Mark 1:14-15, Luke 4:18, Luke 7:22; cf. John 3:14-17). Instead of being just one (albeit the first) of five distinct activities, this should be the key statement about everything we do in mission. 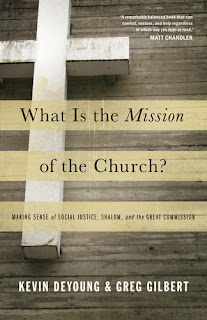 Comments like this are important but all too often ignored in practice by churches that (for example) adopt the UN Millennium Development Goals as their mission statement, or count their valuable work in running a recycling centre as mission.

DeYoung and Gilbert's book is the best statement I have come across of the other side of the debate. Here's a rough summary of what they say:

The Church's mission is summarised in the Great Commission – “to go into the world and make disciples by declaring the gospel of Jesus Christ in the power of the Spirit and gathering these disciples into churches, that they might worship the Lord and obey his commands now and in eternity to the glory of God the Father.” (p62)

The gospel is about the restoration of the whole of creation, but the centre of the gospel is the reconciliation of God and humanity brought about by forgiveness of sins through the death of Jesus. Being part of the kingdom of God requires acknowledging the kingship of Jesus – hence all gospel preaching demands response of repentance and faith.

We cannot build or grow God's kingdom – that is God's work and is never ascribed to people in Scripture. We are to bear witness to it – we are subjects and heralds of the kingdom, not its agents.

Biblical challenges to just living are about supporting those who cannot provide for themselves, treating the poor with dignity and not showing partiality to the rich, and not oppressing the poor by cheating them of promises payment. “If we truly believe the gospel of God's grace, we will be transformed to show grace to others in their time of need.” (p171)

“Social Justice” is a slippery phrase, but it's much clearer to talk about loving each other. Doing good to others and alleviating need is an opportunity for the church, not a responsibility to beat ourselves up over when we hear of injustice that we can do nothing about. “We really ought to love everyone, not all in the same way, but when we can, where we can, however we can.” (p193) “We are finite creatures and therefore it's important for us not to flog ourselves with undue guilt because we cannot show full, unbounded, active, suffering-relieving love to all seven billion people on the planet.” (p225)

The Biblical concept of “shalom” needs a lot more scholarly attention. There is both continuity and discontinuity between the Old Creation and the New Creation, but entrance into the New Creation is only through Jesus. Peace with God is the most important sort of peace, and so when we talk about seeking shalom for our communities, seeking peace between people and God has to be our top priority.

“It is not the church's responsibility to right every wrong or to meet every need, though we have Biblical motivation to do some of both. It is our responsibility however – our unique mission and plain priority – that this unpopular, impractical gospel message gets told, that neighbours and nations may know that Jesus is the Christ, the Son of God, and that by believing, they may have life in his name.” (p249)

In other words, DeYoung and Gilbert argue that the mission of the Church is not the same as the mission of God, because we are finite beings called by God to witness to what he has done, is doing and will do in Jesus. They also draw a distinction between the mission of the church and the good that Christians as individuals should do in the world when we have the opportunity to do so.

I have to say, I found DeYoung and Gilbert's main idea persuasive and compelling. I think they did enough to establish what they set out to do. In particular, I liked their argument that we should see injustice as a potential opportunity for us to love others rather than as an area of responsibility which we should feel guilty over. It was immensely liberating, especially given the way that so many sessions on global justice issues often present it in a guilt-tripping sort of way.

The biggest weakness, I thought, concerned their discussion of whether the Western Church is currently unjust. They recognised the importance of justice at an individual level, but didn't consider the potential for structural injustice. It is quite possible that even though we as individuals might not be oppressing the poor or defrauding workers of their wages, we might well be participating in and supporting structures which do oppress the poor by keeping them poor and denying them opportunities which are offered to the rich. There's obviously a lot more work to be done on that, but it doesn't affect their overall argument.

I started this post by saying that there is quite a bit of debate around. Actually, there is nowhere near enough. Last year I went on a conference, organised by evangelical Anglicans, on the issue of Seeking Justice. I was hoping it would at least address the sort of question that DeYoung raises, but there wasn't even a seminar on it - the opposite view was everywhere assumed. For those in the UK, DeYoung is speaking on themes from his book at a conference on 31st January.