The De-Churched and God's Judgement

Here's a graph I find absolutely terrifying. It shows church attendance stats for the UK (I think it's for 2005). 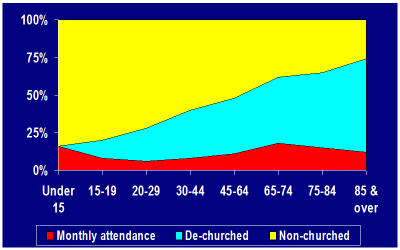 On the horizontal axis is a breakdown on the population by age. And on the vertical axis is the proportion of the population as a whole. The three colours on the chat represent those who are currently regular attenders at church (at least once a month), those who used to attend church but no longer do so and those who never attended church.

What terrifies me is what this means for those who have been leading the church over the past few generations. God entrusted the care of his people to them, and they presided over the decline of the church so severely that nearly 75% of those who are now 85-year-olds were once part of a church, but only 15% or so of children currently are. Roughly 80% of living Brits who have been part of a church are no longer part of the church.

42The Lord answered, "Who then is the faithful and wise manager, whom the master puts in charge of his servants to give them their food allowance at the proper time? 43It will be good for that servant whom the master finds doing so when he returns. 44I tell you the truth, he will put him in charge of all his possessions. 45But suppose the servant says to himself, 'My master is taking a long time in coming,' and he then begins to beat the menservants and maidservants and to eat and drink and get drunk. 46The master of that servant will come on a day when he does not expect him and at an hour he is not aware of. He will cut him to pieces and assign him a place with the unbelievers. 47"That servant who knows his master's will and does not get ready or does not do what his master wants will be beaten with many blows. 48But the one who does not know and does things deserving punishment will be beaten with few blows. From everyone who has been given much, much will be demanded; and from the one who has been entrusted with much, much more will be asked.

I can hear in my head the sort of conversation God will have with people who were ministers during that time. When God tells them of the privilege it was to be made a steward over his household and family, and asks them what they did with it. When they try to make their pathetic excuses for how they did their job so poorly that 5 out of every 6 people in their churches left and the church went from being seen as the foundation of society to being a boring irrelevance in just two generations.

And the church leaders today who carry on the trend - who don't see that their job is about bringing people to know Jesus - it is about saving lives rather than making sure the few already in the lifeboat have more comfortable cushions as they watch the rest of the world drown. Is their lot going to be any better?

God's judgement and wrath against the vast majority of British church leaders over the last few generations is going to be terrible. And that scares me, because God has called me to follow after them, and I am beginning to see something of what an awesome responsibility it is...

Still, as you say, it's not a good graph. I'm not sure which is worse, the number of people who have left church or the fact that the process of decline and dechurching will start from a much lower base today than it did sixty years ago. (Oh, and the graph's key shows the wrong colour for 'unchurched'. That's another bad thing!)

Right, I'll get off to the prophets to read about remnants and cheer myself up.

Oh - there's plenty of good signs too. Historically, when Christianity has found itself in a non-churched culture, it tends to thrive...

Oh, and good spot re the graph. I'll just edit it to make it clearer and you look crazy... (but of course I'll leave the comments here)

This post got me thinking about another significant failure of the church: teaching parents to bring up children as believers. As I talk to church folk with grown up children, it's amazing how many of those children are in (for want of a better phrase) non-standard relationships, and not in church. Ministers failed to teach the faith, and parents have copied that failure. How much teaching do I hear about Christian parenting? Not much.
Mind, I'm a Vicar now, so I'd better not continue the trend!

If I were to try and reduce Deuteronomy to 5 statements, I suspect at least one of them would be about the importance of raising children to know and fear the LORD.

Why do you think we don't bother teaching parents how to raise Christian children? Agreed that many assume it's the job of the Church...

Why are we so poor at raising children as Christians?

Good question. How about some, all or none of the following:

We don't have good models. Maybe we don't spend as much time in one another's homes, so those new to the faith don't see Christians modelling Christian family. What happened to the Titus 2 teaching of older men and women bringing up younger men and women in the ways of the Lord?

Selfishness and laziness. It takes effort, planning, persistence to do family prayers, reading the Bible with children, etc.

Low levels of discipleship generally. Following Jesus is often presented as a Sunday thing, not a whole-life thing. The idea that the Bible has something to say about parenting is, I think, alien to most parents. I certainly haven't been approached by parents asking what the Bible teaches on this subject!

We've bought into the "teenagers always rebel" theory, so if and when they do, we shrug our shoulders and call it a 'normal part of life' rather than an opportunity for greater discipleship and love.

We've also bought into the 'professionals look after children' theory. Youth work (and the whole notion of teenagers) are a very recent phenomenon. See the book 'Do Hard Things' for more. Also, if teenagers are left to goof around, rather than being given responsibility and having high expectations of them, is it no wonder they pull out of things that require commitment, e.g. discipleship!

Hi John,
This topic is near and dear to my heart. I don't feel that all the blame lays at the feet of people. I put most of the blame on the church itself. I have noticed that the churches that do well do so because they teach about our Father/child relationship with God. They offer love and not just condemnation. There is a balance between the two. One of the biggest differences between the OT and the NT is that in the OT, God was a wrathful God and in the NT, He became our Father. Here in the states, I've been to churches where the spirit doesn't move and attandance is stagnant. I was fortunate enough to find a church blessed by the spirit where membership stood at 800 and one year later it was 1600.
Many churches teach the basics but for those who want the "meatier" teachings......well, finding churches willing to delve that deep is becoming difficult. I sense the spirit of fear in many churches. It is like they are afraid of teaching anything that may "offend" people and thus reducing attendance. To me, that is not a very good example of faith. If a church had the faith that God would provide, then they would have the courage to teach the truth regardless of how painful it is.
But its not just the Christian faith that is having the same problem. I work with many people from India and I hear all the time that the more "westernized" India becomes, the less the children follow the Hindu tradition.
I came across and interesting Gnostic Gospel this weekend; The Gospel of Peace and it was eye-opening for me. In this particular gospel Jesus is teaching about proper diet. It states that disease is the work of Satan. And yes, I understand the questionablity of the gnostic gospels but for me, this text illustrated just how much spirituality science has removed from our life.
There was a time when rainbows were practically "magic" to the ancients because they didn't understand the science behind it. All of nature was sacred to them. We have lost that sense of sacredness because science claims to have explained God away.

All sorts of issues there. I'll put some more on here about science in the near future...

I think it's not just emphasis on the father/child relationship that makes the difference (though churches that do that in the UK seem to grow too). But so do most churches that actually seek to connect the unchanging truths of the faith with a changing society.

Hi John,
Please don't get me wrong; I love science. I study just about every branch of science. And what I've come to firmly believe is that God and science are the flip side to the same coin. Everything in creation is based on complex laws; laws of chemistry, laws of physics, etc. Well, God created the "laws" that govern this universe. I love His speech at the end of Job; when He details His work. But thats another whole topic. I just didn't want you to think I was against science; what I am against is science that leaves God out of the equation and the solution.

As a non-churched-now-church-goer who's also studied physics followed by theology, I feel responsibility must fall equally on religious leaders and the religious themselves (like you and me)

Even more so when the religious masses default into attacking the world, and each other - using scripture as their main weapon.

Even the terms 'churched','non-churched' and 'de-churched' are unclear, grating to a modern ear, and don't seem to fit with reality. What exactly do they mean? Is it an either/or option? Why is 'once a month' the boundary for regular church going? What kind of churches count? Do you have to be registered to a single church? Is going to church the ultimate goal of the Christian faith? Is it the measure by which to judge success? I think these questions need to be answered carefully before using the data to condemn anybody.

Might I suggest that these terms, along with phrases such as 'God's judgement and wrath...' are equally damaging in evangelism, and not helpful in communicating the core premises/concepts/ideas of Christianity to the culture we live in? Perhaps some humility that we all mess up in witnessing to the world is in order?

There has to be a boundary somewhere for what counts as regular churchgoing - once a month seems as good as any. Another important figure would be the number who went at least once a year, but in many cases there isn't any kind of idea of "membership" there. Thinking of the church I attend, I think once a month is about right for a minimum attendance from someone who would still see themselves as a "regular".

And of course I wouldn't use those terms in evangelism. They're jargon, and jargon shouldn't be used to communicate with people who don't share it.

I should probably take the opportunity to affirm a few things though: