Krish Kandiah has started an interesting discussion about preachers at megachurches who video their sermons for use in other congregations. 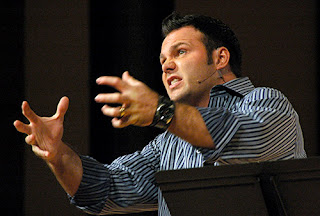 It's long been something I've been uncomfortable with, but not been able to put my finger on precisely why not. Krish suggests 4 problems with the approach:

I think I'd agree that all of those are definite dangers, but I'd push the "personality cult" point further than Krish does. Having video sermons seems to say that not only is the Main Preacher unusually gifted (which may well be true), but it makes it harder to raise up good secondary leaders, or even good primary leaders for other churches / to succeed the main leader.

A church has 4 main congregations on a Sunday, meeting in different venues. For the sake of unity, the church leader decides that they will all have the same passage on the same day. Main Preacher does 2 of them, and upcoming leaders do the other two. Main Preacher's job is then not only preparing the sermon, but also mentoring the two upcoming leaders in preaching. They do a significant fraction of their preparation together or in discussion with each other, but end up with finished products which are their own. This doesn't add significantly to the workload of Main Preacher, and means that the upcoming leaders get the benefit of being mentored by Main Preacher, improve quicker. After a few years, if they were already fairly gifted and worked hard, they would likely be able to preach at a similar standard to Main Preacher, and probably taking a style of their own, albeit one heavily influenced by Main Preacher, and the result is greater multiplication of the ministry.

If these upcoming leaders are (for example) people who already know how to preach and are fairly gifted in it, that looks like a much better way of doing it in the long term.

I should add that I've got a lot of respect for John Piper, Mark Driscoll et al, and I'm sure they've got good reasons for doing it. I just don't see what those reasons are, and would be interested to know...

On the other hand, I'm aware that the church I'm a minister at does use video sermons from time to time as a way to give staff a month or so off preaching. That seems like a good idea, as long as it isn't regular...

It'd be brilliant to see Piper and Driscoll &co raising up many next-generation preachers, passing on their approach, gifting and experience to train others. Seems the Biblical model (2 Timothy 2:2).

The danger otherwise is that a church build around the gifting of one man will one day be in real trouble when that man one day retires, dies, or, God forbid, falls.

And there's few greater joys than to be raising up future leaders.

On the other hand . . . one curate at HTB has to preach in person six times on a Sunday! That's not ideal either.

Dan - that's why my scenario suggested the Main Preacher speaking twice and the two juniors speaking once each. Six times is too many. I get tired enough after two!

If you've got that many congregations, you should have more people gifted in speaking. Especially when you've got as many on staff as HTB has.

My wife pointed out that HTB are extensive producers of videos which other churches use (Alpha, Marriage Course, etc). I think those are a different case because they are on preparation-intensive subjects which there isn't necessarily already someone working on in the local church.

Its a balance isn't it - resources like the HTB videos are great, but I'm not convinced long term that using Nicky Gumbel Alpha videos would really be better than having people within the church trained up as evangelists...

I used to be part of a church, before moving 200 miles away, that had about 400 members in 4 congregations... no-one would really have complained if the pastor preached either to all 400 together or 4 times on Sunday every week, but instead he oversees a staff team who are committed to training up others - we probably had 16-20 people preaching on a regular basis, and preachers knew their congregations, were face to face with them, and could love and be loved by those they preached to. Wasn't perfect but it seemed a healthy way to go.

Agreed - I think healthy large churches would be better not using the Alpha videos if they've got a central course (but the Marriage Course ones are really useful because of all the work in sorting out the interviews with couples and so on).

The church my wife used to be at (rightly IMO) had a big Alpha meeting with a dozen or so tables, and got members of the congregation to do the talks, because they had the people.

On the other hand, if you're at a small church without the good preachers, Alpha videos are really useful. Maybe get a trainee preacher to do one of the talks...