Bits and Bobs - Livingstone and legalism

For my own part, I have never ceased to rejoice that God has appointed me to such an office. People talk of the sacrifice I have made in spending so much of my life in Africa. . . . Is that a sacrifice which brings its own blest reward in healthful activity, the consciousness of doing good, peace of mind, and a bright hope of a glorious destiny hereafter? Away with the word in such a view, and with such a thought! It is emphatically no sacrifice. Say rather it is a privilege. Anxiety, sickness, suffering, or danger, now and then, with a foregoing of the common conveniences and charities of this life, may make us pause, and cause the spirit to waver, and the soul to sink; but let this only be for a moment. All these are nothing when compared with the glory which shall be revealed in and for us. I never made a sacrifice.

The Telegraph had an interesting article about Christians fleeing from Iraq.

And Mark Driscoll describes how to become a legalist: 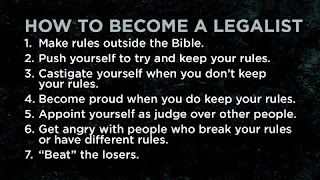 I enjoyed the bit about "How to become a Legalist". However, I think it belies how easy it is to do just that. I believe that there are tons of folks who fall prey to exactly the pattern outlined, but because the rule(s) they have devised seem natural or reasonable to them, they don't see the path they are taking. My point is simply that legalism (like most of Satan's devices) is insidious and not always easy to pick out until it's too late to excise with ease.