Lots of stuff written about how to understand the Bible, especially the Old Testament, is written quite badly. It (the stuff, not the OT) is unclear and uninteresting and often repeats the same obvious points. I think it is because they don't tend to realise that there are a lot of good analogies between the way that the Bible works or the way that preaching works and the way that a lot of the rest of life works. [Dale Ralph Davis seems to be a major exception to this rule because he applies everything so well and keeps it relevant.]

This is an attempt to explain what sometimes gets called "multiple horizons" (a bad title) in a way someone like me would understand easily...

Back when I was a maths geek, I used to like patterns called fractals. Here's a picture of one: 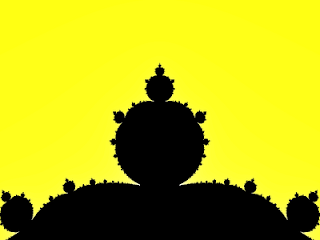 What is special about fractals is that you can zoom in on them as much as you like, and they still look the same. With that fractal, if you picked any of the little circle things and zoomed in on it, you'd get exactly the same pattern as you do with the big picture.

You get the same sort of idea in lots of other fields besides maths - sometimes in a piece of music, one little bit of it shows you something of the pattern for the whole. Or in a book, one scene or action represents the pattern of a much larger section.

Well, it's pretty much the same in the Bible. Often we get little episodes that have the same pattern as much bigger ones. For example, 1 Samuel 2, God has mercy on Hannah, who is sad because she can't have children. Hannah sees that as a pattern of how God has mercy on Israel, which is barren, by giving them a king, which is what Hannah is part of. But we can now see that that itself is part of a much bigger pattern - God having mercy on a spiritually barren world by giving us Jesus. It's the same pattern at lots of different levels, like a fractal.