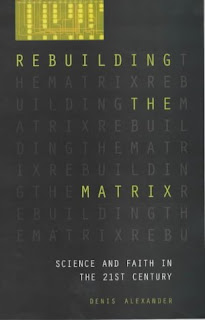 I put off reading this book for years, a) because I knew a fair bit about the subject and b) because I didn't especially get on with Denis Alexander when I'd heard him speak on it. Having said that, it's surprisingly good.

It is aimed to be a fairly academic but accessible book by a Christian who is also a respected scientist about the relationship between Science and Christianity. And it actually does that fairly well. His theology of science seems pretty much right, though he doesn't really make a big thing of it. The book tends to cover the areas that most books and talks on science and religion cover - notably history and creation / evolution.

Alexander spends a lot of time saying not very much, but I guess that's important if this is aimed at a largely non-Christian audience (which it seems to be). I guess this book is best aimed at someone who is university educated without much background in theology, and it does a pretty good job of that. It would probably be the book I'd be most likely to recommend to such people.

If I was being critical, I'd say that he could often be a lot clearer and more concise. But I suppose my biggest criticisms would be that he doesn't allow his theology of science to impact on miracles or the question of general revelation, and that he assumes that science and "faith" tell us complementary truths about reality - an approach which is useful to an extent, but which doesn't actually hold together philosophically especially well.

And for those who are interested in such things, he's very much a theistic evolutionist, to the point where he is really quite critical of Young Earth Creationism, but also of evolutionary naturalism.

'he assumes that science and "faith" tell us complementary truths about reality - an approach which is useful to an extent, but which doesn't actually hold together philosophically especially well'

Many of the truths they tell us about reality are complementary.

Flood, mechanism of creation, nature of the human, existence of free will, ...

All potential areas of overlap - whether they are actually addressed by revelation is a different matter entirely.

So does he default to a position of "I'm a scientific materialist and I'll fit scripture around that as and where I can"? Do you?

No and no. He quite clearly accepts the miracles of Jesus, for example, and also accepts the possibility of miracles today.

I'd genuinely like to hear his answer to the question of whether he thinks God could have revealed scientific information in the Bible. He might answer "he didn't"...