They say one of the tips for how to do successful revision in an arts subject is to read lots of things you haven't read before... I don't think this counts, as it doesn't really touch directly on any of the topics I'm being examined on. But then again, I don't need an excuse to read good spiritual biographies like this one. 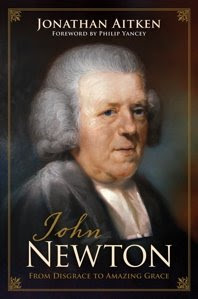 John Newton had a somewhat unusual life story, including privileged childhood, being a slave of black slave traders in Africa, running his own slave ship, a long time as minister of a church, political campaigner, key figure in English Christian history, and important figure in English social history, writer of the most famous hymn of all time - Amazing Grace.

Aitken's biography reads a little oddly for the genre of Christian biography, quite possibly because he knows a fair proportion of the British readership could well come from non-Christians interested in historical biography written by a former government minister. And actually, this might well be a good present for people like that...

As a Christian biography, it isn't as mind-blowingly challenging as Steer on Hudson Taylor or Elisabeth on Jim Eliot. But it also manages to cut it as a good historical biography for non-Christians, which neither of those others really do. It can be read with significant profit by just about anyone. Recommended.

'Tis a point I long to know,
Oft it causes anxious thought;
Do I love the Lord, or no?
Am I his, or am I not?

2. If I love, why am I thus?
Why this dull and lifeless frame?
Hardly, sure, can they be worse,
Who have never heard his name!

3. Could my heart so hard remain,
Prayer a task and burden prove;
Every trifle give me pain,
If I knew a Saviour's love?

4. When I turn my eyes within,
All is dark, and vain, and wild;
Filled with unbelief and sin,
Can I deem myself a child?

5. If I pray, or hear, or read,
Sin is mixed with all I do;
You that love the Lord indeed,
Tell me, Is it thus with you?

6. Yet I mourn my stubborn will,
Find my sin, a grief, and thrall;
Should I grieve for what I feel,
If I did not love at all?

7. Could I joy his saints to meet,
Choose the ways I once abhorred,
Find, at times, the promise sweet,
If I did not love the Lord?

8. Lord decide the doubtful case!
Thou who art thy people's sun;
Shine upon thy work of grace,
If it be indeed begun.

9. Let me love thee more and more,
If I love at all, I pray;
If I have not loved before,
Help me to begin today.