A bit of a stream of consciousness post coming up...

I was at church this evening, and it was really cool that one of the verses read out was 1 Corinthians 15:26, which features prominently in Harry Potter and the Deathly Hallows, which was only released yesterday. Shame in a way that it wasn't picked up on, or explained properly.

The last enemy to be destroyed is death.
1 Corinthians 15:26

The reason it wasn't explained properly was that the church I go to is doing a (thankfully very rare) doctrinal series in the evening services at the moment. I tend to dislike doctrinal series of sermons for many reasons, including the fact that it's a lot harder to learn something from them if it's already a topic I've thought and read about. Another of them is that it makes it too easy for the preacher to set the agenda and just say what they wanted to say anyway about their favourite subject, whereas working through a book should (hopefully) constrain them more to say what the passage says.

Anyway, this series is on Union with Christ. As I've argued before, at greater length, Union with Christ is the dominant Biblical metaphor for how we are saved, but it is so often ignored by evangelicals at the expense of substitutionary atonement (the idea that Jesus died in our place). Of course, substitutionary atonement is an important, true and Biblical idea, but it's not the only important, true and Biblical idea and the idea of union with Christ seems to be more frequent and more important in Biblical thought, so it's great seeing an evangelical church spend some time thinking about it, even if it does mean doctrinal sermons in the evenings for a bit.

What the preacher said got me thinking a bit. One of the difficulties with preaching union with Christ is that it's difficult to explain beyond saying we are united with Christ in his death and resurrection. So I modified something the preacher said to come up with an analogy... Like all analogies, it isn't perfect, and like all my drawings, it requires a bit of imagination. 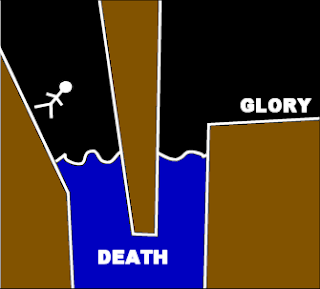 The way things are naturally, we're separated from God. But not only that, we're also falling into death. We can't stop ourselves, and we can't swim. We are going to drown. It's actually our fault we are here too because we have ignored God and the way he wants us to live our life.

(I would have labelled the barrier as sin, but actually even perfect created things are separated from participating in the glory of God.) 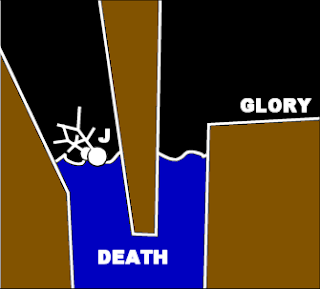 Jesus then comes into our situation. He didn't have to come this side of the barrier, but he does. He comes, he grabs us, if we trust in him, and he dives into death himself. He could have stopped us falling for a bit, but that wouldn't actually have done any good; we'd still be separated from glory and we'd only have died again later; we'd still be on the slippery slope.

And Jesus goes through death with us, holding us, united to us. 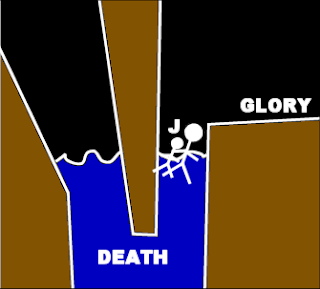 But then, because he is God and he didn't have to die, and he is more powerful than death, he comes out the other side. He rose to life, and he raises us to life too, with him, in glory, never to die again. 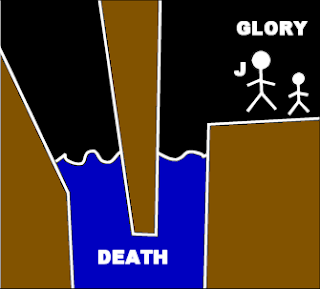 Spiritually, this is true for Christians now, because we have been united with Christ by him taking hold of us and us trusting in him. But physically, we haven't died yet. We're still waiting for that, but we know that because Jesus has gone through suffering and death and been raised again to glory, and because we are united with him, when we go through death, we will be raised and will be united with him in glory.

Great post, Custard, but careful with this:
(I would have labelled the barrier as sin, but actually even perfect created things are separated from participating in the glory of God.)

This isn't true: in the next life perfect created things will participate in the glory of God.

But only after they have been united with the Uncreated.

I think we get to share in God's glory in a way the angels don't and in a way that Adam couldn't before the Fall.