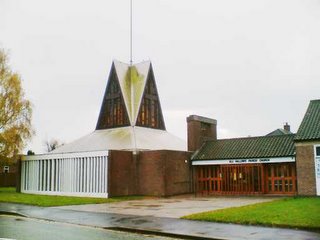 I was with someone who was well known in the church, so I got a few people talking to us. Not at all sure whether people would have spoken to me if I'd been on my own.

Probably about 50 people there, with a fair range of ages, sitting on nice chairs arranged so that it felt fairly full, but with room for more. It's a 60s building, with quite good natural light. The reputation of the church is solidly evangelical.

10:45 morning service. It was fairly informal mostly - quite a bit of banter between the leader and congregation, both when the minister was there and when other people were. It started with the fairly new vicar reflecting on his three months in the parish and thanking people for helping him to settle in. Most of the service was then a chap who'd been to India over the summer and worked with the family of the (Indian) parish assistant. He and the PA both then talked about the work the church was doing over there, particularly with some poor villages. This was done in chunks (using powerpoint), interspersed with the normal liturgy. See my thoughts on materialism and social action. Most of it was fairly encouraging and challenging.

Mostly modern (post 1995) hymns with a few golden oldies, sung using either hymnbooks or OHP, with large print copies of the ones on OHP available for those who wanted. Played well and unobtrusively by a band.

None as such - the stuff on India took its place.

This was far from a typical service, so I can't really say a huge amount more than I've already said.