Jerusalem has of course been under the rule of lots of different groups over the years, and for most of the last 1500 years it has been under Muslim control. And many of the Muslim rulers have no doubt been very good and competent. But as with any selection of rulers, some of them have been completely potty...

For example, one of the gates in the city wall is known as the Golden Gate, and is in the East side of the city wall, opening directly into the temple mount area. Or it would do if it hadn't been bricked up by Sultan Suleiman I in 1541. 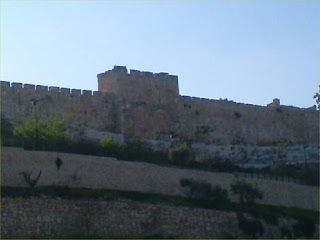 Allegedly, his reasoning went something as follows:

In Ezekiel 43:4, in a passage about the permanent restoration of the nation of Israel, God's glory returns to the temple through the East gate of the temple. This had become strongly associated with the idea of the Messiah coming (coz the Jews acted like they didn't notice that Jesus was the Messiah). So in order to stop the Messiah coming and God's glory returning to a rebuilt temple, he bricked up the gate. Because God and the Messiah are really going to be stopped by a few bricks. They also then put a Muslim cemetary just outside the gate, because that would make it a ceremonially unclean place, so good Jews (including Elijah, if he came in front of the Messiah) couldn't use it anyway).

But I think the prize for maddest ruler of Jerusalem probably goes to Caliph Tariqu "The Mad Caliph" al-Hakim who reigned from 996 until 1021. Among other things, he allegedly banned:

He was also a big fan of killing people, sometimes killing them himself. I've read somewhere that one of his hobbies was paying young men to climb up a tower in his palace, then jump into his pool. The problem was that the pool wasn't directly underneath the tower, and the results were sometimes a little messy. But perhaps that's why he liked it.

But his most spectacularly stupid act was ordering the destruction of the Church of the Holy Sepulchre / Church of the Resurrection, built around the site of Jesus' death, burial and resurrection. In doing so, he caused a huge rise in concern for Christian access to sites in Jerusalem which was one of the factors leading to the Crusades. I'm aiming my next Israel blog to be about that church.

It's probably worth adding that the Druze religion holds that Caliph al-Hakim was the incarnation of God. That probably started from one of his courtiers trying to keep his head for significantly longer than the average, but it seemed to stick and al-Hakim encouraged them, even if he didn't explicitly claim to be God himself... Odd - C.S. Lewis's famous mad, bad or God argument seems relevant here, especially as al-Hakim was so plainly both mad and bad.

Unsurprisingly, he died in suspicious circumstances. It's thought his sister hired assassins to kill him before he killed her.

This is an equal opportunities blog. I'm willing to lay into anyone.