Israel 2 - The Dome of the Rock

Lots of potential to offend here... In fact, the Dome of the Rock and surrounding area is just about the most politically sensitive area in the world. In fact, an old fat politician just visiting the area managed somehow to trigger the Second Intifada. I'm neither aiming to offend or not offend here - I'm simply aiming to describe the world the way I see it. On the right is a picture of me not seeing the Dome of the Rock.

It's pretty certain that the area was the area used for the Jewish Second Temple (as built in Ezra and Nehemiah, as enlarged by Herod and as visited by Jesus. Jews claim (with pretty good evidence) that it was also the site of the First Temple (destroyed in 587/586 BC), and before that the threshing floor of Araunah the Jebusite which was bought by David in 2 Samuel 24. Muslims deny at least some of that, mostly because it would mean that the Jews were probably the legal owners of the site, which they claim was where Muhammad ascended into heaven from (that's at one end of the site, covered by the Al Aqsa mosque).

The Dome of the Rock is built over a rocky outcrop on the site, thought to have been the actual threshing floor of Araunah. A later tradition also identifies it with the rock where Abraham nearly sacrificed Isaac in Genesis 22. The Muslims, of course, claim that it was Ishmael who was nearly sacrificed (though that claim doesn't seem to appear in the first 2000 years or so of the story being told, but that sort of thing never really seems to worry Muslims much).

It is a very noticeable and beautiful building when seen from a long way away.

It is even more amazing from a hundred metres or so away. 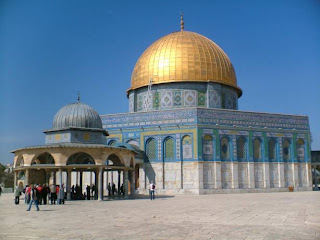 But close up, it becomes very apparent that it is in fact the most prominent and famous building in the world to be built almost entirely out of horrible 1970s B&Q-style tiles. 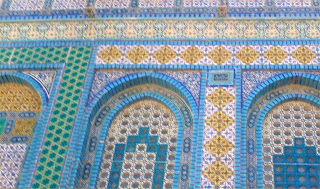 The Dome of the Rock is meant to be one of the key early examples of Islamic art. It is therefore interesting that it actually seems to have been commissioned by Muslims, but designed and built for them by a group of Syrian Christians....