Does God Seek His Own Glory? 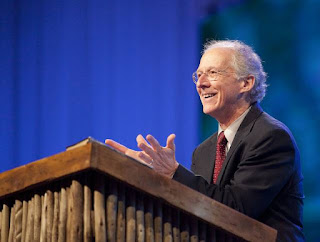 I quite like John Piper. For those who aren't familiar with him, he's an American preacher and theologian who manages to combine “heavy” Calvinist theology with astonishingly deep passion for God and his glory and breathtaking love for the lost. His book Desiring God really helped me reconnect my emotions with my spirituality after a really tough time in my life. I don't see eye to eye with him on everything (women's ministry is one big example), but I'd happily sit under his teaching and I'd love to have half of his love for God.

One of the issues that Piper has really brought to the fore in modern theology is the question of God seeking his own glory. Piper is all for it, echoing Jonathan Edwards (18th century American theologian, not 20th century British athlete). And he argues very persuasively from Scripture that God does indeed seek his own glory, and that we also should seek God's glory.

The problem for Piper's theology comes with the question of whether God is right to seek his own glory. Doesn't that make him an egomaniac? Piper's usual response to that challenge is well captured in this recent cartoon by Adam4d. In short, God is so wonderful, so powerful, so wise, that for him to seek the glory of anything other than himself would be both ridiculous and idolatrous. 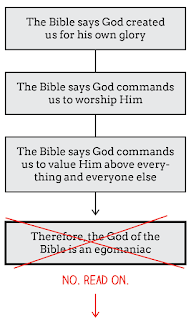 On a logical level, Piper's response is fine, though I think he's missing a very important factor. There is a problem with passages like Philippians 2 which emphasise precisely the fact that we shouldn't seek our own glory because Jesus didn't seek his own glory. There's also a problem on a personal level. We as Christians are meant to imitate the character of God, but Piper here draws a line between God's passion for his own glory and us being meant to have a passion for God's glory. I don't think it quite works, or not as well as the alternative.

You see, Piper's arguments for God seeking his own glory are mostly from the Old Testament. In the New Testament, there are some things we see much more clearly. One of those is the Trinity, and that makes all the difference in the world to Piper's argument.

Jesus replied, ‘If I glorify myself, my glory means nothing. My Father, whom you claim as your God, is the one who glorifies me. John 8:54, NIV

After Jesus said this, he looked towards heaven and prayed:

‘Father, the hour has come. Glorify your Son, that your Son may glorify you. For you granted him authority over all people that he might give eternal life to all those you have given him. Now this is eternal life: that they know you, the only true God, and Jesus Christ, whom you have sent. I have brought you glory on earth by finishing the work you gave me to do. And now, Father, glorify me in your presence with the glory I had with you before the world began.' John 17:1-5, NIV

Does God seek his own glory? Kind of. God is Trinity, and each of the persons of the Trinity seeks each other's glory not their own. Even though Jesus has infinite value and worth and power, he does not seek his own glory; he surrenders it for our good and for the greater glory of his Father, who is also worthy of all honour and glory and praise. He is therefore our perfect example as well as our Saviour. That is what we should imitate, and to my mind it's a much more compelling reason and example than the ones often used by Piper and his followers.