God, Stephen Hawking and the BBC

The currently most-read article on the BBC website has this headline "Stephen Hawking: God did not create Universe". As a Christian who has studied a fair bit of physics, I'm going to discuss that. Quick summary of my conclusions: Hawking has got it a bit wrong, but the media are over-sensationalising it as usual. And in the process, they are providing a massive amount of free advertising for Hawking's new book.

It's worth pointing out that I haven't read Hawking's article, because it's behind the Times' paywall, or Hawking's book, because it hasn't been published yet. But at this stage of his career, Hawking is far more a populariser of ideas than an original thinker, so I've got a pretty good idea where he is coming from on this... 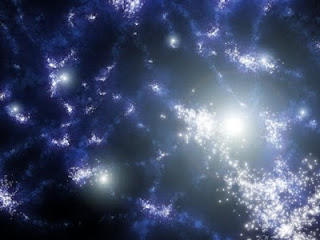 The BBC quotes Hawking as writing:

Because there is a law such as gravity, the universe can and will create itself from nothing.

Spontaneous creation is the reason there is something rather than nothing, why the universe exists, why we exist.

It is not necessary to invoke God to light the blue touch paper and set the universe going.

It's worth explaining a few things from these quotes. Firstly, Hawking's philosophy of how God acts in the universe. Hawking seems to have a kind of "God of the gaps" idea going on here - he only sees it as "necessary to invoke God" when there is no other explanation for something.

Hawking is still wrong though. Rowan Williams is better (quoted on the front of the Times Online today):

Belief in God is not about plugging a gap in explaining how one thing relates to another within the Universe. It is the belief that there is an intelligent, living agent on whose activity everything ultimately depends for its existence.

In other words, Rowan Williams (correctly IMO) asserts that God's existence and action is necessary for science to keep working at all. God and Science aren't competing explanations for the same phenomenon. 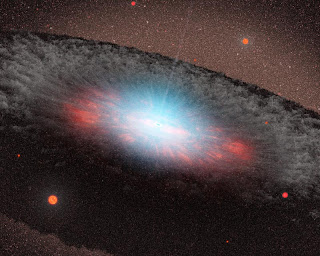 The other thing that is worth explaining is what it means for Hawking to write that "Because there is a law such as gravity, the universe can and will create itself from nothing."

In quantum physics, things do sometimes just appear out of nowhere, and then vanish again. But when they do, the total amount of energy involved multiplied by the time they last for has to be less than about 10^-34 Js. So an electron / positron pair, for example, could only last about 10^-21s - one thousand billion billionth of a second. And something bigger would last even less long. So we don't see them very often and they don't usually make much difference to the universe on a big scale.

But that is the only known way of getting something out of nothing. So if the universe wasn't created - it just happened - that's the only known way for it to happen. The problem with that of course is that the universe has lasted quite a while - roughly 14 billion years. Therefore, in order for this theory to work, it needs to have almost exactly zero total energy.

The only known way of having a sufficiently large amount of "negative energy" is through gravity. Imagine that there is a lump of rock a very long way from the Sun, and it isn't moving. Now imagine that it falls towards the Sun, and in doing so it speeds up. It has clearly gained kinetic energy because it is moving. At a year 7 level, we'd say it has converted Gravitational Potential Energy (GPE) to Kinetic Energy (KE). But at the start, its total energy was zero, and at the end its KE is positive, therefore its GPE must be negative.

It's often asserted in astrophysics circles that Black Holes have zero total energy, because all the negative GPE cancels out the positive energy from their mass. And therefore it is possible to get something out of nothing if the something is a black hole because it has zero total energy. On the other hand, I've done a masters course in astrophysics, and I've never once seen that calculation done, or even referenced. Personally, I don't believe it, and I believe it even less when it comes to saying the universe as a whole has zero total energy, but am happy to change my mind if given a good reference that doesn't just assert it.

If it was true, it should mean that you get black holes popping into existence and staying there quite often, and we don't see that happening.

But the idea here is that many cosmologists think that that is what happened with the universe - it popped into existence as a kind of unstable black hole with zero total energy that then exploded. And that's what Hawking means by saying that gravity allows the creation of something from nothing.

Lydia also points out "It's also worth reading the comments at the bottom of the article, if only to be staggered by the amount of rudeness levelled at John Lennox - quite a contrast with the gracious way in which John interacts with Hawking's ideas."

...Spontaneous creation is the reason there is something rather than nothing, why the universe exists, why we exist.

Not why we exist. The formation of a universe depends on the uncertainty principle. It's not clear if just any formation will provide a suitable environment for us to exist.

...Spontaneous creation is the reason there is something rather than nothing, why the universe exists, why we exist.

Not why we exist. The formation of a universe depends on the uncertainty principle. It's not clear if just any formation will provide a suitable environment for us to exist.

What isn't clear at all to me is why the Uncertainty Principle (or whatever governs Quantum Vacuum Fluctuations) should exist in the absence of anywhere for it to exist or any time in which or at which it might do anything.

Well, quite. That's my point.

Hawking, in his 2005 Theory of Everything, admits the possibility that the universe may just be, meaning, I suppose, that there is no t=0, as in the moment of creation. The universe is then a being, not a creation.

He formulates a closed system including time with no boundaries (actually he refers to an imaginary time). t=0 would be a boundary which rules out creation. That's indeed fortunate because if it did have a boundary one must ask a boundary with what?

"be" I should think is rooted in the word "begotten", as in

begotten, not made,
being of one substance with the Father;
by whom all things were made;

There are all sorts of problems with Hawking's suggestion of imaginary time.

1) What would it be like to experience it?
2) Is there any basis for thinking that imaginary time is anything other than a mathematical convenience in certain calculations with Relativity, which always cancels out at the end? (no)
3) How does the notion of imaginary time work with Quantum Mechanics? (it doesn't)

Hawking speculates quite a bit about this, especially in the collapsing phase. I think he concludes that the second law of thermodynamics still applies. It seems the cosmic microwave background would be blue. I doubt evolution would be possible. Mercifully we don't have to worry about living in a collapsing universe. We only have to worry about when the lights go out.

... How does the notion of imaginary time work with Quantum Mechanics? (it doesn't)

Perhaps imaginary time is unintentionally addressed in the Wikipedia entry about the uncertainty principle:

...the only kind of wave with a definite wavelength is an infinite regular periodic oscillation over all space, which has no definite position.

Note definite applies to wavelength, not infinite. So the uncertainty principle applies only between the poles of imaginary time, not to the total spacetime between the poles if we describe the universe as an instance of an infinite number of regular periodic oscillations over all spacetime.

Per the New International Version (©1984)

...Jesus replied, "Foxes have holes and birds of the air have nests, but the Son of Man has no place to lay his head."

And so it seems. And why do they make it worse by ambiguous references to the "Son of Man"?

Imaginary time is time multiplied by the square root of -1. I don't see how it would work in the Uncertainty Principle unless the energy was also imaginary...

And what does the Son of Man have to do with it?

Yes he talks about what we call real time as actually something we make up in our minds to explain our observations. He starts the discussion on his 2005 Theory of Everything disc 3 track 4. The main points are made on track 7.

The place for the Son of Man or anyone else to rest his head is uncertain unless the uncertainty of his momentum is infinite. So if you found such a place you might get a bad knock on the head. So science begins catching up with the bible about 2000 years later.

Except I suppose that if we set finite limits on the momentum (such as that incurred by someone being asleep), the required quantum uncertainty in the position is hbar / delta p, which will be pretty small.

Much better is the old joke about Heisenberg being pulled over for speeding.

Policeman: Do you know how fast you were going?
Heisenberg: Haven't got the foggiest, but I know exactly where I am.

Hawking opines about the anthropic principle at the end of disc 3 track 2:

...Must we turn to the anthropic principle for an explanation? Was it all just a lucky chance? Backwards in a council of despair - a negation of all our hopes for understanding the underlying order of the universe.

Quite. The Anthropic Principle implies that one of the two following statements is true:

The term creation when applied to the usual 4-dimensional universe is a logical contradiction because it assumes a pre-existing state of non-existence, and without time nothing is pre-existent. Living creatures are created (actually formed) in time but not time itself. I believe the original Cherokee Indian belief was that God was the one who breathed life into living creatures, not the creator of inanimate objects.

...There are a heck of a lot of universes, most of which are not hospitable to life.

Why waste your effort if there's nobody to watch the show? So I guess I have to go with your first option -

..This universe was deliberately rigged to be hospitable to life.

Does sound a bit cynical though.