How to Handle Difficult Issues Biblically

1 Corinthians 8-10 is an often-neglected bit of the New Testament (except for a few verses in chapter 9, usually read out of context). But actually it provides us with a really helpful pattern for working with difficult issues in the Church. 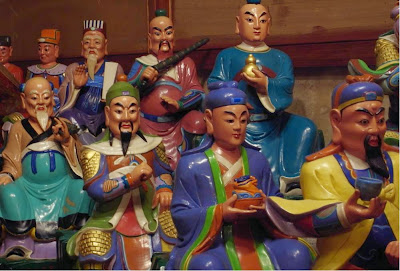 The problem in Corinth was the issue of meat sacrificed to idols. In first century Corinth, most meat was slaughtered in the context of worship at one or other of the many temples. It was then either served at public feasts, served at guild meals or sold in the meat market. Membership of most trades required being in a guild; they generally met in pagan temples. If you ate meat that had been sacrificed to idols, it was often understood as sharing in the worship of the god to whom it had been sacrificed, just as Communion was seen as sharing in Jesus' sacrifice. The Corinthian church was obviously divided on the issue, and had asked Paul for advice.

So how does Paul handle this difficult situation?

A couple of quick applications to current issues in the C of E:

People who talk about women's right to be bishops (for example) don't really understand what it is to live as a Christian, let alone to be a bishop. If women do have that right, they should be willing to lay it down for the sake of their brothers and sisters who would be offended by it. And those brothers and sisters should probably lay down their right not to be offended for the sake of preserving unity and allowing women to serve in the capacity of bishop.

What the homosexuality squabble debate desperately needs is people who are willing to articulate both sides of the Biblical argument and show how they fit together. So often what is produced by both camps is hideously one-sided, and sometimes just ignores important pastoral issues or runs roughshod over the consciences of those who in good conscience disagree, even if they do so without good reasons. Yes, if we disagree with someone, we should seek to persuade them, but we should do so in love - whether love for the knee-jerk homophobes or for the "out and proud" types.