Communion Services in the Early Church

In the early church, there were three main types of service – the agape meal, the synaxis (similar to Service of the Word), and the eucharist (Greek for “thanksgiving”). Over the years, the agape meal largely faded out, and the synaxis and eucharist merged to make the modern Communion Service. In this post, I'll trace very briefly how we got from the Early Church (pre-325) to the modern situation in the Church of England. 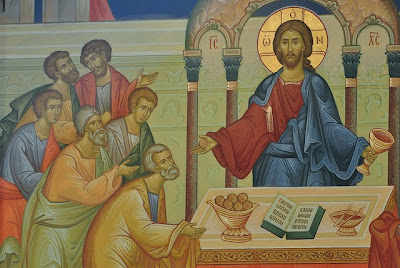 The structure of the synaxis was as follows: Greeting, Bible Reading, Sung Worship, Bible Reading, Sermon, Outsiders Leave, Prayers, Dismissal. I've already written about how some of the elements worked, but one development it's worth noting is that the “traditional” pattern of Epistle, Psalm and Gospel readings developed from the earlier practice of one reading at the start of the service, then a time of sung worship (usually using Psalms), then a second reading which was the basis for the sermon. Outsiders were welcome to attend the service, but were expected to leave after the sermon and before the prayers. Catechumens (people who were preparing for baptism) were welcome to stay for the prayers but were expected to leave before the Eucharist, at what is now the Peace.

Dix identifies four key stages in the Eucharist service, which are reflected in the gospels – Jesus took bread (1), he gave thanks (2), he broke it (3) and gave it to the disciples (4).

Offertory - “he took bread”
Originally there was just one loaf (1 Cor 10:17), but in the 100s AD, members of the congregation brought their own bread to church to share, and it was brought forwards at this point, like the wave offering or the grain offering in the OT. People offering their own bread for the Communion came to be seen as symbolic of offering their lives to God and having them transformed; after people started believing that the bread became Jesus during the prayer, it eventually got confused into the idea of us offering Jesus' sacrifice on the cross. To make it clear that we can only offer ourselves to God because of what God has done in giving Jesus as a sacrifice in our place, Cranmer moved the language of offering ourselves to after the Communion. Sometimes (e.g. 1662) the offertory gets confused with the money offering too. (Wafers are a much later innovation, and in my opinion a wrong one.)
Eucharist - “he gave thanks”
A prayer was said over the bread and wine, thanking God. The prayer typically followed the pattern: blessing God, thanks for creation, thanks for redemption, thanks for the new covenant (and our place in it), institution narrative (i.e. the story of the Last Supper), prayer for us as we receive communion, praising God again. Later on, the Sanctus came to replace or be integrated into the Thanksgiving sections. The key phrase in this whole section is Jesus' command to “do this in remembrance of me” - reminding us that we are sharing communion to remember Jesus. The Prayer of Humble Access is descended from the minister's prayer for the people as we receive communion.
Sometimes other prayers were inserted after the Eucharistic Prayer, largely because of the 4th century idea that the prayer of thanksgiving “consecrated” the bread and the wine, and that somehow God was therefore more present then, and so prayer was more likely to be heard. We see remnants of this in the use of the Lord's Prayer in Common Worship Order 1. Sometimes it even went far enough that the prayers during the Synaxis ceased to be used – we don't need two periods of intercession during the service. Of course, originally, the prayers of intercession were in the Synaxis rather than the Eucharist, and I think that's the best place for them.
Fraction - “he broke it”
The bread is broken so that it can be distributed. Originally this may well have used 1 Cor 10:17, but after the church stopped using just one loaf they switched to using words like “God's holy gifts for God's holy people” or “the body of Christ, broken for you.” Sometimes people today use 1 Cor 10:17 "though we are many, we are one body, for we all share in the one bread", but do it without using one loaf. That seems silly to me. In the medieval church, the Fraction came to be seen as the point at which Jesus' body was actually broken, so Cranmer dropped it altogether. 1662 re-introduced it during the Institution Narrative, which is historically odd.
Communion - “he gave it to them”
Distribution of the bread and wine was usually done with the ministers standing, and the people walking between them. Afterwards, there was just a short dismissal and the service ended.

(This is part of an irregular series spinning off Gregory Dix's On the Shape of the Liturgy. The data is almost all from Dix, but I've reworked it in the light of a rather different theology.)