I know that the whole creation / evolution argument is (or should be) old hat now, but it still rumbles on in some corners, and seems to be very much live in the USA. Maybe it's just that I got fed up of the poor reasoning on both sides of the argument and dropped out of it a while ago. 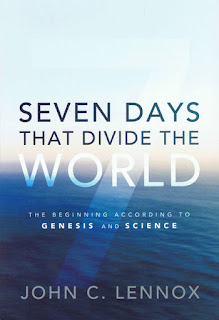 John Lennox is one of the best writers and speakers in the debate at the moment. His previous books God's Undertaker and Gunning for God are among the best I've read on science/religion and apologetics, so I was expecting good things of this one too. I wasn't disappointed. Well, I was, but not to start with...

The first three chapters are the best thing I've read on the creation / evolution debate in a long time. Lennox frames it by using the heliocentrism debates of the 16th-18th centuries to show that one generation's dogmatic insistence on one interpretation of the text in the face of science is another generation's mad over-literalism.

The next chapter is a bit of a let down. Lennox debunks a lot of the common myths in the creation / evolution debate but ends up committing himself to the odd view that the universe is old, that apes evolved but that Adam and Eve were a direct creation. In doing so, he argues that young earth creationists should accept that their view flies in the face of the scientific evidence but ignores the significant genetic evidence that we share ancestry with apes just as much as they do with each other. It seems to be almost a worst of all possible worlds view – he avoids over-literalism in the understanding of Genesis 1 and affirms the importance of scientific evidence, but then ignores the scientific evidence on the basis of what looks like an over-literalistic reading of a single verse. Alternatively (i.e. from a YEC point of view), he rejects large amounts of what the Bible says in favour of dodgy science, but still tries clinging onto one bit of it.

Chapter 5 is closer to a return to form. Lennox examines what the point of Genesis 1 actually is, if it isn't to teach specific details about how the universe came to exist. There are still weaknesses in this chapter though – Lennox doesn't really get into the culture at the time Genesis 1 was written, so only sees some of how Genesis connects with today's culture. He doesn't point out how it shows God as the consistent and sole creator of the universe, which is so important for understanding of science. Of course Lennox believes that, but it's easy to miss it in Genesis 1 unless you see it as in part a reaction to the polytheistic creation narratives of surrounding cultures. Another example would be Genesis giving people the status that the other nations gave to their kings.

There's some of that in the appendices, when he discusses whether the Genesis account is derived from the Babylonian one, but Lennox never really draws out the significance of the important contrasts. The other appendices are pretty good, but never really get to the height of the first three chapters. The book is well worth the price just for those.