The Trajectory Argument for Gay Marriage 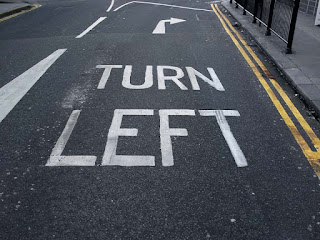 I wish I was wrong about homosexuality - it would make life so much easier if there were even a half-decent Biblical or theological argumet for the legitimacy of committed same-sex sexual relationships. But I've never seen one, and so my conscience is held captive by the Word of God.

One of the really poor excuses for an argument in favour of gay marriage is what is sometimes called the trajectory argument. Steve Chalke spends about half his time on it here. It goes roughly as follows:

There are several things in the New Testament which the NT writers seem fine with but because of our years of reflecting on the Bible and doing ministry in a changing culture we now realise are wrong - the obvious examples are slavery and banning women from teaching. The Church's attitude to homosexuality is another one of those.

The danger with this argument is that in this form you can apply it to just about anything where the Bible disagrees with contemporary culture - where it applies and where it doesn't becomes just a matter for individual conscience, and the Bible loses its prophetic power to challenge our ways of thinking when we are too deeply shaped by our culture. We need some kind of clear control to see when a development is legitimate and when it isn't.

The best such control is trajectory - when we compare the New Testament to the surrounding culture, and see which direction the Bible moves the culture in. We can see this argument can be valid by thinking about the Civil Rights movement in the US. They campaigned for small steps to be made in terms of desegregating schools - they didn't campaign for a black President immediately. And that's pretty much what the Bible does with slavery. In a society where masters had strong rights over slaves but slave revolts were brutally suppressed, the Bible condemned slave trading and masters beating their slaves, and called slaves and masters brothers. It is clearly heading towards the abolition of slavery, even thought that move would have been unacceptable in the Roman society of the day.

We could say the same about polygamy. Polygamy is never portrayed positively in the Bible, and in the NT, it is banned for church leaders. The trajectory is clearly towards monogamy.

But what about when we look at the trajectory for homosexuality? In the above link, Steve Chalke summarises the situation in the ancient world fairly well:

It is common knowledge that from the early Republican times of Ancient Rome it was considered natural and unremarkable for adult males to be sexually attracted to and to pursue teen-aged youths of both sexes. Pederasty (a homogenital relationship between a man and a pubescent boy outside his immediate family) was regarded as normal and condoned... Though same-sex relations between women are not as well documented, the Romans generally had far more flexible gender categories than our contemporary society.

If anything, Chalke underplays it. The Romans also allowed same-sex adult sexual encounters, as long as it was a high-status man initiating. But most of the New Testament was written in and to culturally Greek areas, which were even more permissive - see here for example. And into that society, the New Testament and the early church advocated that sex belongs inside heterosexual lifelong marriage, and not outside. There is no hint of other relationships being potentially equivalent to marriage. There is no question of homosexual relationships being equal to heterosexual marriage, even though that would have been more accepted in the society of the day than at any time since.

Email ThisBlogThis!Share to TwitterShare to FacebookShare to Pinterest
Labels: homosexuality

Hello John. This is Josh Cooper, an old student of yours. It was a mind blowing experience hearing your voice when I was listening to the Reasonable Doubts podcast. I thought I would send you a quick message wishing you well in all things. I live in Illinois now, so it was a shock to say the least to hear your voice 5000 miles and 10 years away!