Here's a passage which I find really unhelpful when you're going through a hard time, but which shouldn't be...


And have you completely forgotten this word of encouragement that addresses you as a father addresses his son? It says,

‘My son, do not make light of the Lord’s discipline,
and do not lose heart when he rebukes you,
because the Lord disciplines the one he loves,
and he chastens everyone he accepts as his son.’

Endure hardship as discipline; God is treating you as his children. For what children are not disciplined by their father? If you are not disciplined – and everyone undergoes discipline – then you are not legitimate, not true sons and daughters at all. Moreover, we have all had human fathers who disciplined us and we respected them for it. How much more should we submit to the Father of spirits and live! They disciplined us for a little while as they thought best; but God disciplines us for our good, in order that we may share in his holiness. No discipline seems pleasant at the time, but painful. Later on, however, it produces a harvest of righteousness and peace for those who have been trained by it.
Hebrews 12:5-11, NIV 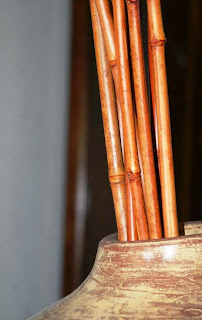 So what? We're meant to endure hardship as discipline? Try telling that to the woman whose child has died – that it's God disciplining her! How's that a “word of encouragement”? It's stupid, pastorally insensitive, and just plain wrong. We don't live under the law. We don't believe in a God who gives us petty material rewards for obedience and punishments for disobedience. Maybe that's the way it worked in Leviticus, but not for the Christian.

There are two problems here. The first is the word “discipline” - most translations seem to use it in Hebrews 12, but I don't think it's warranted.

Discipline: the practice of training people to obey rules or a code of behaviour, using punishment to correct disobedience.
παιδεια: upbringing, training, instruction.

The Greek word which we translate as “discipline” doesn't quite mean that though. “Training” would be a better translation – it's the idea of an adult training a child. Sometimes that involves punishing disobedience - we suffer because we do things wrong. Sometimes, like with hard physical training, it's difficult and painful when we do it right as well. The word used for "discipline" here carries both ideas - it's the same word translated “training” in 2 Timothy 3:16. The passage isn't saying that all hardship is discipline. It's saying that God uses hardship to train us, like any kind of training can be hard, but we respect it and work with it.

The NIV translators generally did a great job – it's just about the best translation of the Bible into modern English. But they had a shocker when it got to Hebrews 12:7, and most other translations didn't do a lot better...

The NRSV is probably the most helpful of the major translations here, except that it still uses “discipline”; “Endure trials for the sake of discipline. God is treating you as children...”
I think Eugene Peterson pretty much nails the sense though in the Message:


God is educating you; that’s why you must never drop out. He’s treating you as dear children. This trouble you’re in isn’t punishment; it’s training, the normal experience of children.

The idea is that we should endure difficulties and hardship because God uses them to train us. God is our Father. He hasn't let go of us; he isn't leaving us to the ravages of chance or punishing us for our own weakness. He knows what he is doing, and he is training us to trust him, even in and through the difficult times. Now that's a comfort, and an encouragement to keep going!
Posted by John at 1:59 pm