What about the Apocrypha? 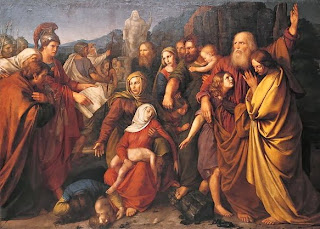 The first record of the process of writing the Old Testament is God writing the 10 Commandments on stone tablets on Mount Sinai in Exodus 20. But only a few chapters later, in Ex 24:7, Moses has something which is described as the “book of the covenant”, which is probably Exodus 20-23, written down by Moses. From then, the Old Testament grew, through a process of editing and compiling various accounts, and people writing down messages given by God to inspired prophets, and so on. There's lots of detail, but it's very dull and the kind of thing boring academics argue about. It's far more interesting and helpful to talk about what the text means than try to come up with novel theories for how it came to be the way it is.

Above all, you must understand that no prophecy of Scripture came about by the prophet’s own interpretation of things. For prophecy never had its origin in the human will, but prophets, though human, spoke from God as they were carried along by the Holy Spirit.2 Peter 1:20-21

The result, over a period of 1000 years or so, was the Tanakh. Tanakh is the Hebrew name for Torah (law) + Naviim (prophets) + Khetuvim (writings), and is pretty much exactly the 39 books of the Old Testament in most modern Protestant Bibles, but in a different order. It's written in Hebrew, with a few bits in Aramaic, which is closely related to Hebrew. It's possible a few bits (Daniel?) might have been written after the Greek conquest, but if so they were written in the old language, for the old culture and set before the conquest.

After the Exile to Babylon, the Jews gained a degree of independence under the Persian Empire, the beginnings of which are seen in Ezra and Nehemiah. But the Persian empire fell to Alexander the Great in 332BC, and over time Greek rule transformed Israel. Tensions occasionally rose as high as violent revolt, especially the one led by the Maccabees in 164BC, which led to an independent Jewish state until it was swallowed up by the Roman Empire.

However, most Jews lived outside Israel, in what is now Egypt, Syria, Turkey and Iraq, they spoke Greek rather than Hebrew as a first language and were heavily influenced by Greek culture in a way that the Palestinian Jews had largely resisted. These Jews translated the Tanakh into Greek, so they could read and study it more easily, with the result being the Septuagint (usually abbreviated to LXX). The LXX isn't quite a straight translation though. Some books (Jeremiah) are a bit shorter in the LXX. Others (Daniel, Esther) are a bit longer, with the addition of new stories to Daniel and explicit references to God and prayer in Esther. Some new books were added too - some stories (Tobit, Judith), some history (Maccabees), and some which fit the Greek/Jewish culture, like Wisdom of Solomon, which says how wonderful Greek philosophy is, then points out it's all there and even better in the Tanakh. The books were also in a different order, with the LXX closer to the order you'd find in most Bibles today.

That meant there were some striking differences between the Hebrew Scriptures, used by Palestinian Jews, and the standard Greek translation of it, used by Grecian Jews.

What about Jesus and the apostles?

Jesus and the first apostles were Palestinian Jews and therefore used the Hebrew Tanakh. Paul was at home in either culture – he was brought up in Turkey, but studied in Jerusalem – and although he quotes from the LXX when writing to Greek-speaking Christians, he only quotes from the bits which were translations of the Hebrew/Aramaic original.

By the end of Acts, however, the majority of Christians didn't speak Hebrew or Aramaic, only Greek, and this was stronger still after the destruction of Jerusalem in AD70. After that, the early church almost exclusively used the LXX for their Old Testament.

Meanwhile, the Jews met to discuss the problem at the council of Jamnia, which is often seen as the start of Rabbinic Judaism (i.e. after the temple and the destruction of Israel). They agreed that the Hebrew Tanakh was indeed Scripture, but the extra bits in the Greek LXX weren't.

During the centuries of persecution, the LXX seems to have been fairly readily available. Judaism wasn't persecuted in the same way that Christianity was, and most churches seem to have owned and used the LXX as Scripture. When St Jerome was commissioned to translate the Bible into Latin in 382, he found the problems, and argued against the use of the extra bits in the LXX. Augustine countered, arguing that the LXX itself was inspired by God, even where it got the translation of the underlying Hebrew wrong. Jerome made some compromises and his translation (the Vulgate) became the standard translation in the Latin-speaking world. The Vulgate:

In the 1500s, the Reformers rebelled against the established Latin Church. As part of this, they looked again at the question of which books should be in the Bible, and almost all of them concluded that the Old Testament we use should be the Hebrew Tanakh, not the Greek Septuagint. Luther, for example, translated the Old Testament from Hebrew into German, and relegated the books that were only in the LXX to an appendix to the OT entitled “Apocrypha: These Books Are Not Held Equal to the Scriptures, but Are Useful and Good to Read”. Luther's idea was widely copied. In the Church of England, the policy was (and remains) as follows:

And the other Books (as Jerome saith) the Church doth read for example of life and instruction of manners; but yet doth it not apply them to establish any doctrine.

Over time, the Apocrypha was dropped from most Bibles to save on printing costs and to make it clear that they aren't on the same level as Scripture.

Meanwhile, the Roman Catholic Church met at the Council of Trent to decide how to respond to the Reformation. One of the items on the agenda was which books should be in the Bibles, and Trent ruled that all the books in the LXX were Scripture.

By and large, the situation today is as follows:

And for those who are interested, the order of books in the Hebrew Tanakh is as follows:

(And that was the simplified version!)