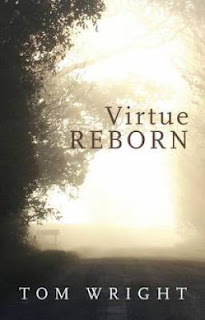 It seems that Tom Wright had three purposes in mind in writing this book. It is a book about how Christians should seek to act in the light of their faith. It is also a book showing how the ancient philosophical idea of virtue is reinterpreted in the New Testament, and again it seeks to show how many of the alternative models of Christian living (e.g. legalism) are flawed.

The UK title is a characteristic Wright pun. It is about the rebirth of virtue as an idea in modern ethics, about the fact that virtue as classically understood is not enough – we need to be reborn, and about how the fruits of that rebirth can be well explained using the language of virtue. In the US, it's called "After you believe". I don't know if that's because SPCK think Americans are stupid.

There are a lot of good things about this book. It's the first time I've seen Wright rebuff one of the common misinterpretations of his work – the idea that “Christian living in the present consists of anticipating the final kingdom-on-earth by working and campaigning for justice, peace, and the alleviation of poverty and distress.” Instead, Wright's basic scheme is this:

1. The goal is the new heaven and new earth, with human beings raised from the dead to be the renewed world's rulers and priests.
2. This goal is achieved through the kingdom-establishing work of Jesus and the Spirit, which we grasp by faith, participate in by baptism, and live out in love.
3. Christian living in the present consists of anticipating this ultimate reality through the Spirit-led, habit-forming, truly human practice of faith, hope, and love, sustaining Christians in their calling to worship God and reflect his glory into the world. (p.59-60)

Virtue Reborn is just about the best book I have ever read on how difficult obedience leads to habits, which leads to formation of character, which leads to transformed desires. It is brilliant on the importance of thinking through actions and views in the light of the gospel.

The more genuinely spiritual you are,... the more clearly and accurately and carefully you will think, particularly about what the completed goal of your Christian journey will be, and hence what steps you should be taking, what habits you should be acquiring, as part of the journey toward that goal, right now. (p.137)

There is a popular view that when we believe in Jesus, God transforms our hearts so dramatically by his Spirit that afterwards we just need to do “whatever comes naturally”. Wright commendably takes a very strong stand against this. However, as often with Wright, there is a real danger that he throws the baby out with the bathwater. So he asserts that Luther held that view (p.52) and does not even mention the idea of “sanctification” in Reformed theology – it is as if evangelicalism has uniformly taught that view since the Reformation, and therefore the choice is either Wright's understanding or an easy-believism. In his bibliography (p.246), he does recognise that his depiction view on Luther is not wholly “balanced and rounded”, but he doesn't even mention the long and faithful heritage of those Protestants who taught and believed that we need to work out our salvation.

The other danger Wright faces in opposing easy-believism is that he downplays the work of the Spirit. He does not mention the possibility, for example, that the Spirit transforms our hearts and minds apart from the slow work of Christian obedience or that he creates in us new desires to do what pleases God. In reality, of course, it is both/and. We should work out our own salvation with fear and trembling, because it is God who works in us, both to will and to work for his good pleasure. (Phil 2:12-13).

Overall then, a good book, a helpful and important book. But Wright again seems to make his characteristic error of over-reacting against those whom he disagrees with.

What I got out of the book was an exposition of virtue ethics that I could accept. VE has always seemed like a rather selfish system to me, teaching that the moral choices I make are actually all about me and my character, rather than about the people I affect and the good or evil that I work in the world.

When Wright casts VE in a specifically Christian light, he says that the purpose of improving our character by right actions is to give glory to God, ie. to realign God, the world and us into our rightful, pre-fall places with us as rulers and priests (as you say). We need to have our minds brought closer to God's, so we can fulfill the task for which we were created. VE isn't then all about us, it's about re-establishing the world as it was meant to be. I'll go with that.

You're right, of course. Wright does show how virtue ethics works well within a Christian framework, and he makes a much better case for virtue ethics than my ethics lecturer at uni made for natural law ethics.

As so often with NTW, I think he's largely right in what he affirms, and partly wrong in what he denies.