This stuff mostly seems obvious to me, but it also seems that it isn't obvious to lots of people, so it's worth saying.

There have been lots of books about the (alleged) differences between men and women, and quite a few books arguing that those differences don't exist. As far as I can tell, both are obviously wrong. And things get a lot clearer if we discuss issues there is much less argument about, like height or strength.

There are obviously difference between men and women in terms of genitals and so on. But it seems to me utterly mad to say that those are the only differences, because the different sex organs produce different hormones. For example, men have a much higher average level of testosterone than women, and it is well documented that testosterone increases muscle mass and aggression, which is part of the reason athletes sometimes use it to cheat. Because men's bodies produce much larger amounts of testosterone than women's bodies, you'd expect this to affect their psychology too.

Many continuous variables (like height, strength, IQ, etc) are pretty much normally distributed - if you plot a graph of height against how many people are that tall, you get something like this:

But when you try plotting men and women separately, you find something like this: 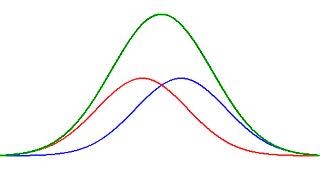 As I understand it, the situation is slightly different with IQs.

Women, I am led to believe, have a higher average IQ than men, but men are more spread out. So it's not just the mean that can be different between the sexes, the standard deviation can also be different.

My suggestion therefore is this:

Roughly this phenomenon is true for pretty much all continuously measurable attributes.

I'd include in that things like love of science fiction, dress sense, relationality, rationality, etc.

Because of those cases, it is a bad idea to describe one trait (e.g. love of science fiction) as distinctly male or distinctly female. Yes, it might be more predominant among men, but that doesn't mean that a woman who likes sci-fi is less of a woman or a man who doesn't is less of a man.

As I said, this all just seems obvious.

Now whether there are underlying ontological differences - whether it is genuinely different being a woman to being a man in some inbuilt sense which isn't due to society or whatever and which isn't just something where there's a scale and there's overlap - that's a different question...

Email ThisBlogThis!Share to TwitterShare to FacebookShare to Pinterest
Labels: gender

Speaker for the Dead said...

Really interesting stuff John... am thinking through the whole question of gender difference at the moment.